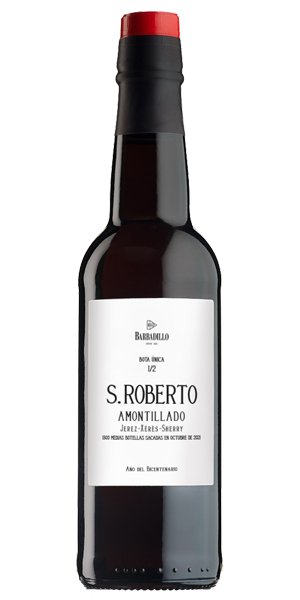 Three Sherries from three casks, each one a different sherry: Two Amontillados and one Palo Cortado from the San Roberto bodega. These are single cask once only bottlings referred to as ‘Bota Unica’ in Spanish, (single butt), so they will be left empty when the contents are bottled. These have been stand alone casks for more time than Barbadillo has records on them.

San Roberto is an old bodega in Barbadillo’s premises in the centre of Sanlucar, not far from the magnificent cathedral bodega ‘La Arboledilla’, but tucked away and out of sight from the regular visitors, and even from those of us who work in the winery. San Roberto holds the fifth ‘criadera’ of Solear, about 800 butts worth , a maturing stage in the Solear solera system that carries on through La Arboledilla before reaching maturity for bottling. The three butts in question were left detached from the rest of the solera for some reason many years ago and have until recently gone unnoticed.

With the company’s bicentennial this year, it was a good moment to discover these liquid jewels and our thanks must go to our predecessors who at some point decided to keep these butts untouched. They may have done so thinking of a time like this, but we can never be sure. We have kept back a few other old casks in San Roberto for another day, maybe for the next generation.