Barbadillo was rated by the Merco Ranking as the best company in Corporate Governance and Responsability. 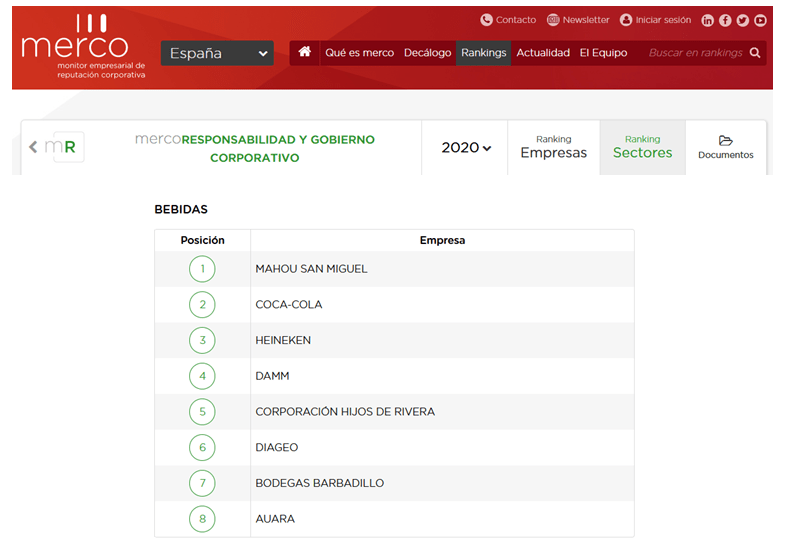 Bodegas Barbadillo was recently rated by the Merco Ranking (Corporate Reputation Business Monitor) as the best company devoted exclusively to wine production in its Ranking of the Best Companies in Corporate Governance and Responsibility.

Barbadillo was awarded 7th place in the “Drinks” sector.  The results were revealed following the analysis of 10,082 surveys received from 1,141 executives, 571 experts and 8,300 citizens.

The Merco Ranking, one of the world’s benchmark corporate monitors, announced its list of the most responsible companies with the best corporate governance in Spain in 2020, a year that has been marked by the pandemic.

With a two-hundred-year history, Bodegas Barbadillo was included in this year’s Merco Ranking for Corporate Governance and Responsibility where it was awarded 7th place in the “Drinks” sector.

Barbadillo’s inclusion in this ranking serves as further recognition of the outstanding corporate values that it is known for; independence and rigour in its management and governance processes; the responsibility and transparency of its actions; its strong commitment to R+D+I and improving day in day out; its use of clear and constant communication to help build trust; dialogue and equality in its work relationships; respect for the environment and the world around it, and, finally its ongoing commitment to improving its relationship with suppliers and clients, as it strives to meet their every need.

Merco (Corporate Reputation Business Monitor) is the world’s first audited monitor. Launched in 2000, Merco is a highly-reputable evaluation instrument, based on a multi-stakeholder methodology, comprised of six evaluations and twenty-five sources of information. The monitoring and verification of the processes and end results are subject to an independent verification, which is performed by KPMG who later publish their yearly report. All of the weighting criteria and results from each edition are publicly available.

Special recognition in the Bicentenary year.

2021 is a very significant year for Barbadillo as the winery commemorates its 200 year anniversary (1821-2021).  The winery has organised a large variety of activities that will take place over the course of the year.  It has also created a Committee of Honour for which His Majesty the King of Spain, Felipe VI accepted the honorary presidency.

As part of its bicentenary celebrations, the winery has recovered an old cask room, which it has converted into a wine cellar-tasting room with space for 25,000 bottles. This wine cellar already houses some exceptional vintages of Solear Pasada en Rama Manzanilla and Castillo de San Diego Wines, among others. It will be completed with other new extractions and very special editions of wines from Bodegas Barbadillo, to create a unique space for the study of the in-bottle storage of the Vinos de la Tierra de Cádiz.